Flourishing in the World

Around the time that Ohkawa was working on his the FFAG concept, a university colleague returned from a visit to the U.S. He mentioned to Ohkawa that another group, the Midwestern Universities Research Association (MURA), was also working on the FFAG idea. MURA was a multi-university collaboration that had the goal of building a particle accelerator for research purposes somewhere in the Midwestern U.S. With encouragement and help from Prof. Giichi Iwata, Ohkawa wrote a letter to MURA’s Technical Director, Donald Kerst, informing him of his FFAG invention. Kerst was himself the inventor of the Betatron accelerator and a former member of the Manhattan Project. Recognizing Ohkawa’s achievement, Kerst invited Ohkawa to come work at MURA, where the FFAG had also been independently invented. Ohkawa accepted the invitation and traveled to the U.S. in 1955. MURA would prove to be one of the launching pads for his later career and success. [AIP Ohkawa Interview; Ken Fowler] 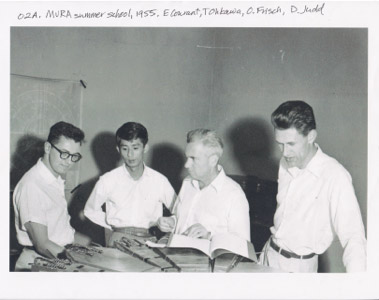 After a three-year stay studying accelerator physics at MURA, Ohkawa returned to the University of Tokyo in 1957. Shortly afterward, the U.S. and U.K. decided to declassify fusion research data. Japan immediately launched its own fusion research program, and members of the Miyamoto laboratory, including Ohkawa, played a key role in discussions over Japanese plans to develop fusion energy.

Some of the key members who launched the Japanese fusion effort in 1959. First row sitting: Prof. Miyamoto (second from right), Dr. Mori (third from left). Second row: Tihiro Ohkawa (third from right), Seishi Kikuchi (fourth from right; a member of AEC in Japan)

Two approaches were intensely debated. “Plan A” was supported mainly by theorists and physicists and would start with basic research on plasma physics. “Plan B,” mainly supported by experimentalists and engineers, would immediately begin with mid-size fusion projects. Through these debates and his activities at MURA, Ohkawa learned the importance of political and social influences on scientific research, as well as techniques for dealing with them. [AIP Ohkawa interview; NIFS Archives Interview records for Kenzo Yamaoto, Shigeru Mori and Masaji Yoshikawa: NIFS Archives ID 100-05-01, 100-10-01, and 100-13-01, respectively]

At the time, Ohkawa was also featured in a popular magazine Taiyo (Sun in Japanese) as one of the nation’s promising youths, about whom Prof. Miyamoto commented, “Ohkawa is an especially promising physicist in accelerator and plasma/fusion research. What I would like to find for him now is a research fund and a wife.” Both wishes would soon be fulfilled.

Ohkawa invented his breakthrough device, a new kind of particle accelerator, the Fixed Field Alternating Gradient accelerator, in the mid-1950s. The achievement brought him to the attention of leading physicists. 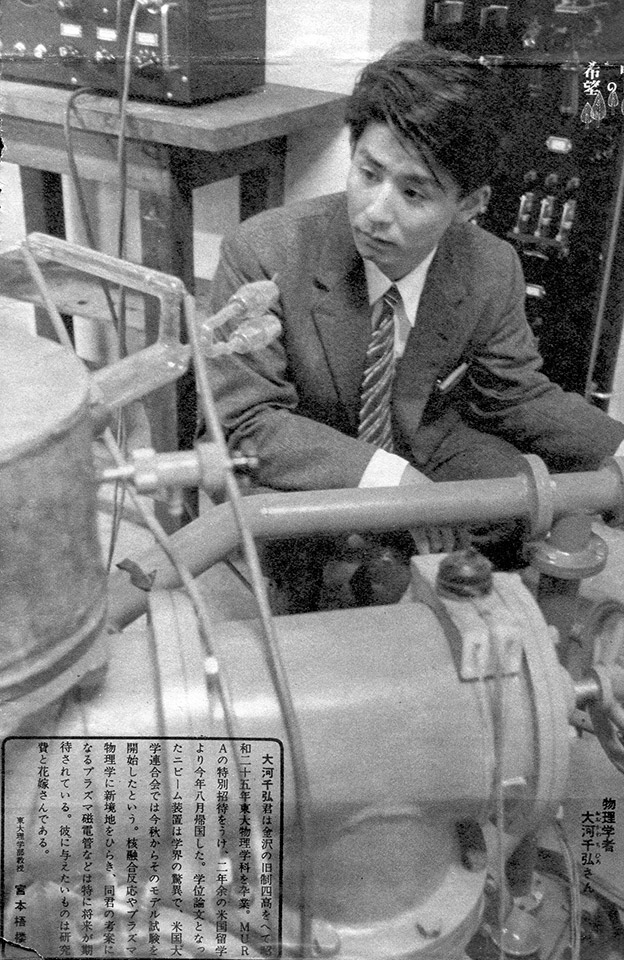 A copy of the page from the magazine “Taiyo”, introducing Tihiro Ohkawa

Soon after, Tihiro Ohkawa married Yoko Hitomi, a graduate of Kyoto University, whom he had first met during his work at MURA while she was studying at the University of Illinois as an exchange student [Takeomi Sakurgi]. In 1959, Ohkawa and his new wife moved to Switzerland, where he worked at the European Council for Nuclear Research (CERN), studying accelerator physics under a Ford Foundation scholarship. The trip also served as a honeymoon for the couple. [Susumu Kamefuchi (Emeritus Prof. Univ. of Tsukuba)]