Seeding for the Future

Even when occupied with large projects such as DIII, Ohkawa never forgot to carefully plan for future initiatives. Mike Schaffer recalls that when he joined GA as a scientist in 1973, Ohkawa made him one of his first special projects colleagues. Bob Miller remembers how he started as a plasma theorist at GA in 1974.

One example was testing an idea Ohkawa had to control impurities out of a fusion device. A new tokamak, called ISX (Impurity Study Experiment) was built at Oak Ridge National Laboratory (ORNL) with DOE support by a GA team headed by Keith Burrell. ORNL physicist Masanori Murakami, who later worked on DIII-D, recalled those days. The test experiments on ISX were successful, and the project also gave GA staff learning experiences on how best to collaborate with outside laboratories.

Stuart Prager, who later became the director of PPPL, also described his unique experiences with Ohkawa during his two-year stay at GA as a scientist.

One of Ohkawa’s key traits was his creative drive, according to former GA scientist Richard Freeman. “His scientific interests were in no way limited to fusion research. He thrived on innovation.”

Wanting to share the lessons he learned from his mentors in Japan and his early life at University of Tokyo, Ohkawa developed a contest called AWAKHO (his surname spelled backwards). Each member of his staff was encouraged to write six new ideas in their scientific notebooks every day. At the end of each month, he collected and read the notebooks, and selected a winner. The winner gained the privilege to sit in the coveted “AWAKHO Chair” and could attend any technical meeting anywhere in the world. This largesse both demonstrated the importance Ohkawa placed on honing one’s vision and innovation, and served as a testimony to the significant value in Ohkawa and his ideas. [Richard Freeman; Ming Chu]

Scaling up to the Big Time

"Tihiro always had his eyes open to the future. He would be designing future projects even when we were just starting to build the current one", said Teruo Tamano. He remembers that Ohkawa instructed him to make an informal presentation to John Clarke (then director of DOE’s magnetic fusion program) at the Doublet III opening ceremony site in 1978. That day, Tamano explained to Clarke how Doublet III could easily be converted into a ‘Big Dee’–shaped tokamak, using computer generated Big-Dee plasma configurations fitting in the Doublet III magnetic coils. Though it took almost a decade to achieve, the conversion into DIII-D would be realized under the collaboration with Japan, and DIII-D at GA became a center of national and international fusion research.

GA chief scientist John Rawls and his team launched a design study to modify the vacuum vessel and convert Doublet III into what was then called Big Dee. The name of the modified device was subsequently changed to DIII-D to reflect the connection to Doublet III.

Rawls was instrumental in the breakthrough Dee shape. “One of the many important things we learned from this collaboration,” he recalled later, “was how incredibly flexible the Doublet III facility could become and how the simplified 'Dee' plasma shape could yield the higher values of β we were after.” 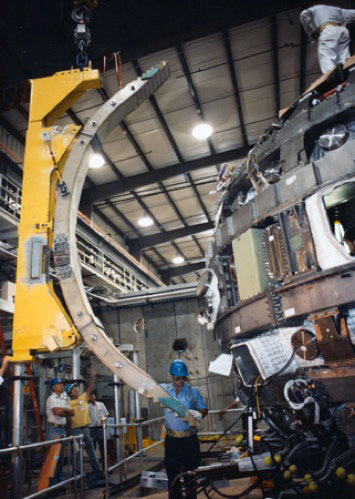 Ohkawa’s foundational work has since been extended by his successors and colleagues in GA’s Fusion Group (Dave Overskei, Dave Baldwin, Tom Simonen, Ron Stambaugh and Tony Taylor, etc.). DIII-D grew from a predominantly GA program into a true national and international center for fusion science. Building on achievements in basic understanding, an integrated program of research at DIII-D now drives toward demonstrating the properties of an advanced tokamak: steady-state operation, improved confinement, enhanced plasma stability, and fully non-inductive current drive at high values of β. The DIII-D program consistently contributes to the development of enhanced-performance regimes that offer the promise of higher fusion performance in the still-under-construction ITER project in France. In particular, ITER will have a very similar plasma configuration as that of DIII-D, although scaled up by a factor of four.